Farewell to a Few Friends

By: Sarah A. Neikam, Operations Manager

The past year was one of loss for many in the world of entertainment. We said goodbye to legends like David Bowie, Prince, George Michael, Merle Haggard, Gene Wilder, Leonard Cohen, Alan Thicke, Carrie Fisher and her mother, Debbie Reynolds, just to name a few.

Each of these famous figures and shining stars entertained and inspired millions of people in different ways and left behind legacies that will live on for decades to come.

Closer to home, a few remarkable souls and friends of the SPCA Albrecht Center also made their way to the next world. This week, I’d like to offer them each a few lines of remembrance and gratitude for their service to the animals and to such a worthy cause.

Robert “Bob” White led an accomplished life as a Naval Officer and business entrepreneur long before joining the SPCA’s board of directors many years ago. He had a sharp mind for business, a soft heart for animals and was a strong supporter of animal welfare. Bob will be remembered for his excellent advice, clever wit and dedicated support of the SPCA’s mission, staff and volunteers. 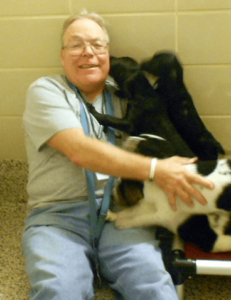 John Paveglio was also an SPCA board member and a devoted reader of this column. John would stop to chat with me nearly every week and let me know that he enjoyed the article and to “keep up the good work”. He was a dog park regular, some would say fixture, and could often be seen walking shelter dogs while proudly wearing his volunteer t-shirt.

John kept track of the dogs he worked with in the SPCA’s Phideaux University program and he was adamant about acquiring a photo of each one to display at home. It’s hard to remember John without a smile on his face and a leash in his hand.

One of the most difficult parts about working in animal welfare, as any pet lover knows, is the all too short lifespan of the creatures we love so dearly. The cute puppies and kittens we knew grow into adults amazingly fast and before you know it, shades of grey and white start to appear in their faces and their once exuberant energy begins to slow.

Hashbone was a dog well known by many at the SPCA Albrecht Center who passed away just a few months ago. He was the first pit bull adopted from the old shelter on Wire Road many years back, and he went on to positively change some of the misconceptions associated with pit bulls and demonstrated that they can be fun, loving, devoted pets. 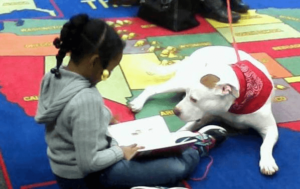 Karen and John Poore gave Hashbone the love, time and training he needed to become a very well-trained, well-behaved and beloved canine citizen who entertained kids during school and camp visits, offered a listening ear to children struggling to read at Millbrook Elementary School’s Paws for Reading library program, and even starred in an SPCA television commercial.

Once, during a Paws for Reading session at Millbrook Elementary, I witnessed a young boy lock terrified eyes with Hashbone after spotting him in the library. When asked what was wrong, he replied “Pit bulls are mean!” and clutched the teacher’s leg. He was curious though, and sat from a safe distance to watch as other children read to Hashbone while he listened patiently and still, eventually allowing a gentle pet or kiss. Every few minutes, the boy would inch a little closer. By the end of the hour, amazing progress was made. The boy was sitting within two feet of Hashbone and even very cautiously reached out a hand for Hashbone to lick. He giggled and ran away smiling.

I’ll never know for certain, but I feel pretty sure that Hashbone left a positive impression on that scared little boy and hopefully helped to change his mind about “mean pit bulls”. He definitely brought smiles and laughter to everyone who knew him, and our memories of him will live on as an encouraging testament to what homeless pets can become if just given a chance, some time, and our love – an ideal that Bob White and John Paveglio already knew and helped to promote through their many years of service to the SPCA Albrecht Center.

Bob, John, and Hashbone leave behind legacies and lessons that will be remembered for a long time to come.

Sarah Neikam is the Communications & Marketing Director for the SPCA Albrecht Center for Animal Welfare. She is an Aiken native and has been with the SPCA since 2012. Sarah lives in Graniteville with her family which includes three adopted cats: Bastian, Luna and Grady, who are all living happy, loved lives thanks to the efforts of the SPCA.

The SPCA Albrecht Center for Animal Welfare is a private, nonprofit, no kill animal shelter in Aiken, SC.  The SPCA also operates a local Thrift Store (“Where Shopping Saves Lives”),  a public, affordable Veterinary Care Center & a Dog Park.  It is our mission to improve the lives of companion animals by rehoming abused, abandoned, and neglected pets while fighting for their well-being through vigorous legislative efforts, humane education, and by offering affordable veterinary care for all.